Sleeping With the Pedagogy

UNRH > Sleeping With the Pedagogy

“Sleeping with the Pedagogy,” is a project that came to life only after “Sleeping with the Annotated Bibliography,” “Sleeping with the Literature Review,” and “Sleeping with the Lesson Plan.” Tasked with studying an avant-garde artist of our choosing through both traditional means of scholarship and by teaching a class and creating a digital pedagogical resource, the website we built is our attempt to engage with Sleeping with the Dictionary, Harryette Mullen’s latest poetry collection. We set out to create a resource that both advanced avant-garde study and could be used in analyzing Mullen’s manipulation of language and the connections of her work to identity, which figure heavily into Mullen scholarship. Using the idea of bringing OULIPO into the 21st century as our launching point, we built two resources, a random poem generator based on Mullen’s “Elliptical” and an N+7 machine that puts a new spin on Shakespeare’s Sonnet 130. Each of these resources is designed to facilitate discussion about mechanized poetry, language and context, and the making and erasing of meaning. They also can be put in conversation with more traditional Mullen scholarship or facilitate discussion outside of the context of Mullen’s work entirely. 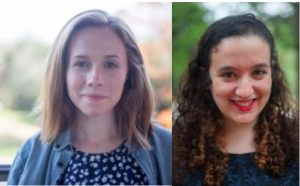 Ellie Rifkin (right) & Meredith Foulke (left):  Ellie and Meredith are both seniors at Davidson College who met and created Sleeping With The Pedagogy through English 394 “The Avant-Garde.” The site was created out of an ardent fascination with Harryette Mullen’s poetry, the goal of innovatively demonstrating linguistic play and the connection between language and identity, and no shortage of brute force google education on coding. Meredith is also a member of the 2018 UNRH Conference Steering Committee.