In contribution to the larger NEH-funded Digital Humanities project Mina Loy: Navigating the Avant-Garde (www.mina-loy.com), I have created a digital animation of Mina Loy’s play “Collision”. Rooted in Futurist theatrical aesthetics, “Collision” explores the impact that advances in technology and science can have in performance. In my reading, however, Loy is not ascribing entirely to the Futurist mode of theatrical performance with “Collision,” but drawing from common Futurist motifs of dynamism and mechanism to create a new avant-garde expression that renders a physical realization impossible. In her writing, Loy anticipates a technical capacity that would not exist for nearly a century after her script was published. My rendering of “Collision” features Futurist elements of dynamism and industry, as Loy’s original script does, but prevents audience participation and engagement, emphasizing the intentional estrangement of this work from the Futurist theatrical tradition. Though people tend to believe digital tools allow us to fully transcend physical limitations, I discovered that I was still bound up in the tools that I had at my disposal and their failings in ways that Loy’s imagination was unbounded. Loy’s creation continues to challenge and trouble even the technology available today, making it even more powerful and effective. 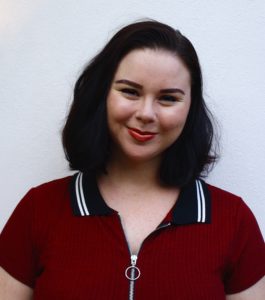 Leah Mell is a senior English and Russian Language & Literature major at Davidson College. Her current projects include an English honors thesis in poetry and a Russian honors thesis in the translation of contemporary Russian women poets. She is the recipient of a Beinecke scholarship for graduate study and plans to pursue an MFA in poetry.