Mapping the Past: A Visual History of Kearney Army Air Field

UNRH > Mapping the Past: A Visual History of Kearney Army Air Field

During World War II, Nebraska had twelve air bases, one of which was located in Kearney. Construction on the base began in 1942, and Kearney Army Air Field (KAAF) opened in early 1943 as a processing base—a last stop for soldiers before heading out to their points of embarkation. KAAF was composed of over one hundred buildings, three runways, and tons of personnel on 2,400 acres of the sprawling Nebraska plains. Today, over 75 years after its completion, only a steel hangar and one runway still exist on what used to be the base. Not much is known about the daily activities of KAAF, nor the day-to-day duties of the personnel who worked there. In fact, most works concerning KAAF focus on its construction, function, and effect on the community. In an attempt to bring KAAF to life for a new generation, this project focused on the creation of an interactive map. With the question “What was life like on the base” acting as the driving force, “Mapping the Past” sought to uncover the daily operations and procedures of the base. Along the way, though, it was discovered that KAAF was not an entirely separate entity from the community of Kearney, introducing the fact that much of what the personnel on the base engaged in was related to the town in some way. The product of this project is composed of twenty-three points on a digital map, which came about through a long but rather simple process. The materials available for this project consisted of the following digitized primary documents: a 1944 base map developed by the Post Engineer, government history files, two photo albums, and copies of the base newspaper. Before beginning the construction process, the first step was to identify secondary works concerning KAAF and the formation of World War II air bases. The latter selections of works were chosen so as to gain an understand for the spatial history of the base. Once these sources had been found, the biggest portion of the project commenced. Before the map could be built, a program on which to make it had to be found. Immediately, two options emerged: VisualEyes by the University of Virginia’s Center for Digital History and StoryMaps by ArcGIS. The decision to proceed with StoryMaps emerged from the fact that VisualEyes was not optimal for mobile use. While this decision was being made, the next step consisted of the research portion. In 2014 and 2015, as part of the Kearney Goes to War Project directed by professors Jeff Wells and Jacob Rosdail at UNK, two photo albums from KAAF were digitized. Following the project, the identities of the people, places, and activities depicted by the photographs remained unknown. To figure out what images to include on the map, these had to be identified—a process that consisted of documenting the contents of the photos and reading through the government files and base newspapers. After the classification of photographs, the buildings on the base needed to undergo the same process, which involved the use of the government documents and base newspapers again, as well as the Post Engineer’s map. Once enough locations were identified, the next step entailed accurately plotting the points. This was done using the desktop ArcGIS program ArcMap 10.4.1. First, the base map was georeferenced to a modern satellite image map. Then coordinate points for each building were collected and recorded on a spreadsheet for use in StoryMaps. Having gathered all the information about the geographical location of buildings, the last part of the map making process required the combining of this data—selecting photographs to represent each building, writing a few sentences to explain the purposes of the building, and plotting the points in Story Maps. Choosing a color scheme to best represent the purposes of each place—recreation and base facilities—as well as the tone of the map composed the very last step. The resulting map began to reveal the tale of life at KAAF. Though not every location has been identified yet, the ones that have convey an important message. While Kearney Army Air Field may have been located four miles from town, it was not an organization separate from the community. As the map continues to grow, the remembrance of this concept will help to more effectively tell the story of daily life on the base. 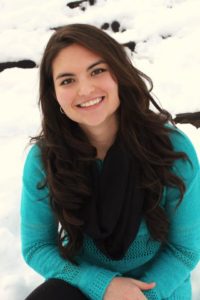 Tatiana Moore is a junior majoring in History Education (7-12) with minors in English and Mathematics. Though originally from Denver, Colorado, she and her family now reside in Norfolk, Nebraska. At the University of Nebraska Kearney (UNK), she is the president of the Phi Alpha Theta Pi Nu chapter; an Honors Mentor for freshmen; a participant of the International Justice Mission, the Honors Program Book Club, and the Undergraduate Research Fellows Program; and a new member of Kappa Delta Pi, the Gold Torch Society, and Kappa Mu Epsilon. Her research focuses on the Kearney Army Air Field in Kearney, Nebraska during World War II. Tatiana hopes to become a teacher following graduation from UNK.