The Man Who Wore Red

UNRH > The Man Who Wore Red

Known as the man who wore red, Allen Stringfellow at the age of seventy-two explains it for himself: “All I ever wear is red, from jeans to mink, so I guess that color is a powerful color for me.” Family Portrait. Allen Stringfellow was born on July 9th, 1923 and was raised in Champagne, Illinois by his great– grandmother, Hazel Briggs along with seven other children. As a peaceful man who chose never to be angry or pervade negative emotions in his paintings, Stringfellow captures the comforting moments in black culture. He detailed the nostalgic memories at picnics, worshiping in church, relaxing in jazz nightspots, or finding ordinary scenes from busy streets and storefronts, all of which reflect his daily life from past to present. Throughout much of his artwork, Stringfellow’s family, religion, and nightlife in Chicago helps revitalize the values that Black Americans carried throughout the 20th century when facing social injustice and poverty. He managed to capture the way people moved in everyday life in his artwork by reflecting their demeanors and postures that revealed a unique characteristic of each life like individual. Black art has served as a mouthpiece for African Americans by offering new perspective for the audiences abroad, yet still upholding its culturally rooted power. Not only does Stringfellow manage to represent life’s moments ranging from the most vivacious to most tranquil, but his representation of black culture in the United States promoted a quality image of black Americans by eliminating preconceived negative stereotypes. From the Great Migration to the ever-evolving growth of the city of Chicago, Stringfellow’s artwork defines the true character in the search for black identity, belonging, and success. His unique background of both the church and Chicago nightlife offer a diverse perspective of a model for a black community. Although two contrasting ways of life, the artist captures these thriving moments in between social and economic inequities throughout the 20th century. 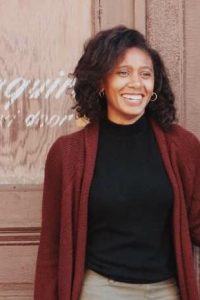 Nia Stringfellow:  Originally from the south suburbs of Chicago, I’m a student at Hope College completing my Bachelor’s Degree in Exercise Science with a Dance Performance Minor. My passions are compiled of health and wellness, art, dance performance, and choreography. Throughout my undergraduate career, I immersed myself in opportunities that would allow for me to study outside of the classroom, which birthed my passion for studying African American culture, and how the history of dance manifests itself into today’s world. Following graduation, I plan to attend school for my Master’s in Arts Administration and would like to pursue further education in African American Dance studies. Within the next three years, I will have launched my wellness and dance center for youth and adults, where I will teach dance, choreograph, host productions, and offer a variety of fitness classes taught by myself and other certified professionals.