Florence As It Was

UNRH > Florence As It Was

Florence As It Was strives to digitally reconstruct the medieval city of Florence, Italy in the year 1492. Using extant architectural evidence, documents, art images, and contemporary representations, we are using photogrammetry and Unity software to create accurate, three-dimensional models of the medieval structures in the city in order to produce a 3D reconstruction of 15th-century Florence. This model will be populated with “hotspots,” each displaying textual data—either original documents, secondary scholarly sources, or researched essays composed by our team—or, hopefully in the near future, aural data as well which will serve to explain and exposit the specific cultural relevance of the highlighted item. We are also placing these annotated structures in a virtual reality map of Florence to create an in-depth experience of the medieval city. These visual experiences are supplemented by a 2D map, on which we are using ArcGIS to place pins which will correlate with the location and data of the “hotspots” in our 3D model. All of these visual creations are linked via a network of texts which will be organized in a searchable database on our site. By using a variety of digital tools and technologies to combine the various forms of data passed down from medieval Florentines, Florence As It Was intends to recreate the environment and experience of 15th-century Florence.

Colby Gilley: Born and raised in Molino, FL, Colby Gilley is a current sophomore at Washington and Lee University in Lexington, VA. A recipient of the university’s Johnson Scholarship, he is a Classics major with an interest in pursuing potential minors in Art History, Poverty Studies, Digital Studies, or Religion. He is currently a member of the Florence As It Was research team, for which he runs a Twitter account, researches and writes essays on various cultural topics, and explores field-methods in photogrammetry. Outside of class, Colby enjoys listening to vinyl records, reading old books, and taking long walks in the woods. 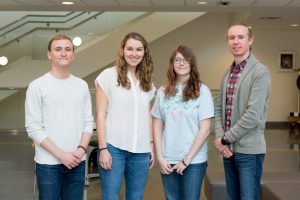 Katherine Dau: Hailing from Dallas, Texas, Katherine is a junior at Washington and Lee University. She is double majoring in Art History and German. Under the advisement of Professor George Bent, Katherine began working on Florence As It Was in the summer of 2017. Since then, she has been translating German texts for the site as well as conducting research, flying drones, and learning the basics of web design. On campus, Katherine serves on the University Board of Appeals, as the German Club President, and as an executive officer in her sorority. Her outside interests include reading, cooking, traveling, and spending time with her dog, Libby.