Davidson College is a small liberal arts campus in the heart of North Carolina. As a school born in the Plantation South which, in 2018, is still toiling with voter suppression and transphobic legislation, the institutional memory of marginalization makes itself visible in all things town and gown alike. Much less visible are the people, the grassroots groups, and the actions which have made progress possible in a conservative environment. This invisibility, combined with the eight semester timeline for undergraduate activists, has contributed to the dispersal of radical action groups on our campus. Due to the lack of an easily accessible, organized collection of records about progressive action groups on campus, student activists at Davidson often have to start from scratch with their organizing— a significant setback. We want to change that. Our team seeks to redress this problem with the help of digital archiving practices. Our digital archive will take the form of an interactive timeline which arranges the historical context, formation, demands, and demonstrations of collective action organizations. This digital timeline aims to serve as a survival guide to groups struggling against dissolution in a silencing status quo. Ideally, this work serves as a basis for future student activists to learn from the strategies, methods, and challenges of those who came before them.

Yashita Kandhari: I am an international student at Davidson College from Kolkata, India. I am in my freshman year and plan to major in Gender and Sexuality Studies and Sociology. 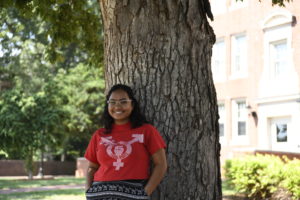 Sanzari Aranyak is a first year student at Davidson College. She is currently undeclared, but is interested in Sociology, Gender and Sexuality Studies, and English. She has long held an interest in the intersections of the social sciences and the sciences, having collaborated on a classroom based research project on urban water use in households in Fresno, California. She presented this research at the 2018 Annual Meeting of the Ecological Society of America in New Orleans. She has won awards for several short stories, written while in middle school and high school. She was also selected for a Presidential Scholarship at Davidson College for the class of 2022.

Arianna Montero-Colbert is a student, educator, programmer, and organizer committed to advancing the accessibility of critical theory through digital education projects. Throughout her undergraduate career, she has co-authored publications on migration, climate change, gendered violence, and the ethics of digital methodologies, and consulted on various instructional design initiatives.