Our project focused on mapping instances of railway travel and reference in the German literature of Peter Rosegger, Berthold Auerbach, Gerhard Hauptmann, and Theodor Fontane. Our goal was to provide a visual representation of rail travel as it first entered into the German consciousness and was received by literature.

The inspiration for our project was the hypothesis that visualization is interpretation, and the visual representation of these literary railways has offered new ways of analyzing and understanding these literary works. We believe our work represents an important fusion of German scholarship and the developing field of digital humanities. 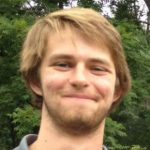 Ben Fleenor hails from the dunes of Virginia Beach, Virginia. Raised in a town built around tourism and the U.S. Navy, Ben has a profound dislike for selfie-sticks and a healthy distaste for all forms of authority. Ben studies philosophy and German at Washington & Lee University, and hopes to practice law someday to protect the little guy and afford a big house. He rates his most valuable skills as critical thinking, making friends with dogs, and making it up as he goes along.